FacultyON.com is the FIRST faculty portal that updates all faculty jobs from all newspapers in India / Kuwait / Singapore. Register here to get daily job updates in your email Inbox... Please verify your registration by checking your email (Gmail / Yahoo / Rediffmail)
To Get Job Alerts Through Whatsapp, send SMS JOB ALERT to 7010379240. Also SAVE this number to your phone contacts so that you won't miss the alerts

National Institute of Technology Karnataka, Surathkal has advertised in DECCAN HERALD newspaper for the recruitment of  Technical and Non-Teaching Faculty Vacancies. Interested and eligible job aspirants are requested to apply immediately. Check out further more details below.

Name of the Institution: National Institute of Technology Karnataka, Surathkal.

About Institution:   National Institute of Technology Karnataka, Surathkal is located in Mangalore City, Karnataka State, India. The Institute was established as Karnataka Regional Engineering College (KREC) in 1960, and upgraded as National Institute of Technology Karnataka (NITK) in 2002.
Mangalore is the headquarters of the coastal district of Dakshina Kannada, and boasts an important centre of education, business and trade in the state. Sri. U. Srinivasa Mallya, a visionary and a philanthropist, contributed immensely to the development of the coastal region of Karnataka, and his effort towards establishment of KREC (now NITK) is the most significant one. In recognition of his role as the founder and architect of the institute, the campus premises is named after him as Srinivasnagar.
Name of the Posts: (Direct recruitment)
Qualification and Experience:
Salary: As per Institution Norms.
How to Apply: Interested Candidates may visit the website for full details.
Address:
National Institute of Technology Karnataka,
NH 66, Srinivasnagar
Surathkal, Mangalore
Karnataka 575025
Job Location: Mangalore - Karnataka
Email:
Contact: 0824 2474000 - 2474023
Last Date: Immediately.
Website: https://www.nitk.ac.in/
Reference: Advertisement on DECCAN HERALD newspaper, dated 25th August 2021. 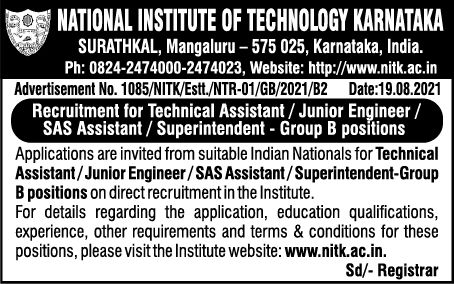 To Get Connected With Us Clickhere
To Get the Latest Faculty Teachers Jobs Updated From FacultyON.com, Register FREE your email now