Rajiv Gandhi Centre For Biotechnology Thiruvananthapuram, Kerala has advertised in THE HINDU newspaper for the recruitment of Various Post for intensive research jobs vacancies. Interested and eligible job aspirants are requested to apply before 12th June, 2020. Check out further more details below. 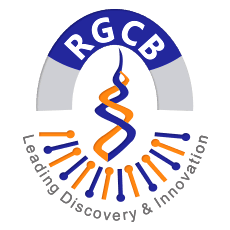 About Institution: The Rajiv Gandhi Centre for Biotechnology (RGCB) is a growing phenomenon. Located in Thiruvananthapuram, the capital city of Kerala, RGCB began in 1990 amongst humble surroundings as a small charitable society called the Centre for Development of Education, Science and Technology (C-DEST). In 1991, recognizing its potential, the C-DEST was made a "Grant-in-Aid" institute of the Government of Kerala and renamed as Rajiv Gandhi Centre for Development of Education, Science and Technology (RGC-DEST), becoming the first institute in the country to be named after Sri Rajiv Gandhi, former Prime Minster of India. On April 18, 1994 the Government of Kerala took a landmark decision to restructure the institute into a comprehensive biotechnology center and thus was created the Rajiv Gandhi Centre for Biotechnology. The institute was first managed by the Government of Kerala's Committee for Science and Technology and Environment (STEC) and subsequently by the Kerala State Council for Science, Technology and Environment.

Qualification: As per the Institution Norms..

Consolidate Pay: As per the Institution Norms.

Reference: Advertisement on THE HINDU Newspaper Dated 13th May 2020. 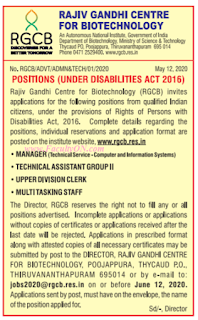