Rajiv Gandhi Centre for Biotechnology, Thiruvananthapuram has advertised in website for recruitment of Project Officer and Project Assistant vacancies. Interested and eligible job aspirants are requested to send mail on  or before 03.04.2020.Check out further more details below.

Name of the College:  Rajiv Gandhi Centre for Biotechnology, Thiruvananthapuram 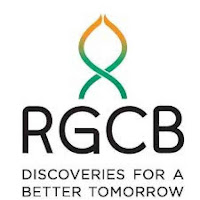 College Profile:  The Rajiv Gandhi Centre for Biotechnology (RGCB) is a growing phenomenon. Located in Thiruvananthapuram, the capital city of Kerala, RGCB began in 1990 amongst humble surroundings as a small charitable society called the Centre for Development of Education, Science and Technology (C-DEST). In 1991, recognizing its potential, the C-DEST was made a "Grant-in-Aid" institute of the Government of Kerala and renamed as Rajiv Gandhi Centre for Development of Education, Science and Technology (RGC-DEST), becoming the first institute in the country to be named after Sri Rajiv Gandhi, former Prime Minster of India. On April 18, 1994 the Government of Kerala took a landmark decision to restructure the institute into a comprehensive biotechnology center and thus was created the Rajiv Gandhi Centre for Biotechnology. The institute was first managed by the Government of Kerala's Committee for Science and Technology and Environment (STEC) and subsequently by the Kerala State Council for Science, Technology and Environment. The foundation stone for the new building was laid on November 18, 1995 by the then Prime Minister of India, Sri. Narasimha Rao. Exactly seven years later, on November 18, 2002 the then President of India, Dr A.P.J. Abdul Kalam dedicated the comprehensive center to the nation. Under the guidance of the founding director, Dr M. Ramachandra Das and his successor Dr R.V. Thampan, RGCB rapidly grew in stature, infrastructure and research output. It had now also become apparent that the resources available to RGCB from the state government could not match the strides of progress the institute was making. Kerala's political leadership displayed its maturity and vision, with three successive Chief Ministers, Mr. E.K. Nayanar, Mr. A.K Antony and Mr. Oommen Chandy persisting with the Union government to develop RGCB into a national centre. By now the institute had also attained national and international recognition with leading discoveries and findings in medical and plant biotechnology.
Name of the Posts:(Temporary Positions)
(i) Project Officer(2)
(ii) Project Assistant(3)
Departments:

AGE:
Preferably between 22 to 25 years of age and not more than 28 years as on April 1, 2020. For SC/ST/OBC candidates age relaxation will be given as per Govt. of India norms.
Job Location: Thiruvananthapuram[Search tip: Search in Google as FacultyON  Kerala to find latest faculty teachers vacancies in Thiruvananthapuram city alone].


How To Apply:
SELECTION PROCESS

Suitably qualified candidates may send applications in the prescribed format with a photograph, a copy of full resume indicating the percentage of Marks obtained and attested photocopies of credentials and experience to reach the undersigned on or before April 03, 2020. Envelopes must be superscripted with abbreviated title of the project, advertisement number and job title. Applications can also be sent as a PDF file to director@rgcb.res.in

No TA/DA/Other emoluments will be given for appearing in the interview.