Rashtriya Military School, Bengaluru, Karnataka has advertised in TIMES OF INDIA newspaper for the recruitment of Teachers job vacancies. Interested and eligible job aspirants are requested to apply within 21 days. Check out further more details below.

About School: Bangalore, August 1, 1946 “The King George VI Royal Indian Military College, the first of its kind in South India was declared open this morning by Maj Gen AHJ Snelling, C.B. CBE, at the Clive Line Barracks” (The Dailypost 1 August, 1946) King George Royal Indian Military College, Bangalore was founded on 01 August 1946 to facilitate education to the sons of Defence personnel from South India. Cadets were educated, then from III to VII standard to enable them to appear for the Army’s Special Examination, which was equivalent to high school education. The three houses, at that time, were Coot, Clive and Cornwall. The School was reorganised in September 1952 and was thrown open to the sons of commissioned officers and civilians. The name of the school was shortened to King George’s School and the school motto was ‘Play the Game’. A member of the IPSC, (Indian Public School Conference) the school prepared cadets for Senior Cambridge Examination from 1952 to 1962.

How to Apply: Interested Candidates may apply to the Principal giving complete bio-data to the following address within 21 days. 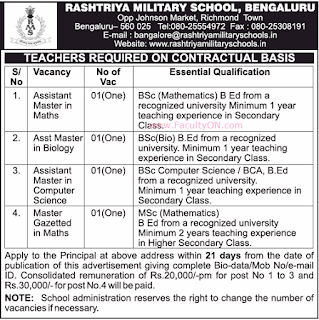