Babuji Avhad Mahavidyalaya Pathardi, Ahmednagar, Maharashtra has advertised in LOKMAT newspaper for the recruitment of Teaching job vacancies. Interested and eligible job aspirants are requested to apply by earliest. Check out further more details below.

About College: In 1965, MLA N.G. alias Babuji Avhad established Parth Vidya Prasarak Mandal. Babuji was a freedom fighter and MLA for the period of 1957 – 1967. He established the college which served the population deprived of higher education The main objective of the college was to give opportunity of education to the rural and poor people mainly to the wards of those who migrate seasonally to sugar factories in all parts of Maharashtra. In 2001 the college was renamed “Babuji Avhad Mahavidyalaya” to express the gratitude and honour to Babuji. In January 2012, the college was awarded ‘A’ grade by the NAAC.

Salary Package: As per UGC norms

How to Apply: Interested Candidates may appear for the interview with the necessary documents, testimonials on 22nd August 2019 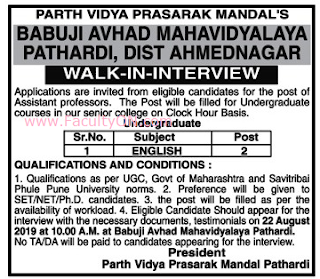